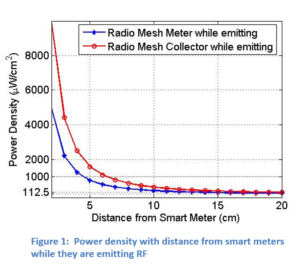 Ed note:  In the spirit of an image being equal to one thousand words, please look at the graph below.  The graph was created using data supplied to Auckland City Council (prior to the advent of the “super city” Auckland Council) by Mighty River Power.

Mighty River Power owns the smart metering business “Metrix” as well as four electricity retailers, namely Mercury Energy, Tiny Mighty, Bosco and Globug.  (The latter company provides a pre-pay electricity service in which customers have both a smart meter plus a second RF producing device (known as a Globug) installed in their home; you can read more about this system HERE.)

As a general rule, Metrix has been installing Elster gREX mesh network smart meters in its customers’ homes. These are a type of radio mesh meter.

As you can see from the graph (which you can enlarge by clicking on it), at close range to the radio mesh network smart meter, the exposure from the meter when it is transmitting is very high.

However, under normal operating conditions, smart meters do not emit RF constantly – they emit RF in brief bursts.  Some smart meters produce RF every fifteen minutes; others may emit RF more or less often.  Testing of a smart meter in operation will show its emission profile.)

The graph above shows that during these brief emissions, the intensity of RF within a few centimetres of the smart meter is between 100 and 200 times 450 µW/cm2. But this is still legal, because if you average the meter’s emissions over six minutes (during most of which time the meter is not emitting at all) you come up with the answer that the average emission is practically zero.  (Time-averaging over six minutes is specified under NZS 2772.1:1999.)

Fortunately smart meters are not compulsory in NZ so no one needs to put up with this type of unnecessary exposure to this type of radiation which is classified as a possible carcinogen (type 2B).

Other posts on the site that discuss the emissions of different types of smart meters may be found HERE, HERE, HERE and HERE (under the Technical FAQs section).

NB:  If you are interested in the smart meter issue, please sign up for updates at www.stopsmartmeters.org.nz

Do you have a GloBug prepay power system?

Do you (or does someone you know) have a GloBug prepay power system?

Mercury Energy is busily marketing its “GloBug” prepay power system to low income families. This year GloBug is one of the sponsors of the annual Pasifika festival in Auckland and it has least one billboard advertisement in Auckland marketing the GloBug system. (The billboard features a very pretty little girl of Maori or Polynesian ethnicity.)

(Note to overseas readers: In New Zealand, statistically, Maori and Pasifika families are more likely to be impoverished than New Zealanders of Asian or European descent.)

Mercury is probably keen to improve the public profile of the GloBug system which has been the subject of quite a lot of coverage in the mainstream media, much of which is not complimentary.

For example a complaint was made to the popular consumer affairs TV show FairGo in 2010 – see http://tvnz.co.nz/fair-go/power-struggle-3736876 ) and a report by the NZ Herald’s health reporter Simon Collins about how families using prepay meters have been “shivering” from cold due to the expense of keeping the power on (http://www.nzherald.co.nz/nz/news/article.cfm?c_id=1&objectid=10839079)

There have also been reports of Mercury Energy bullying customers to accept the GloBug prepay system (see: http://www.nzherald.co.nz/nz/news/article.cfm?c_id=1&objectid=10744327) and NZ Herald columnist Brian Rudman also excoriated Mercury Energy after the company threatened to move him to the GloBug system after he did not pay a bill that he had no recollection of ever receiving. (See http://www.nzherald.co.nz/opinion/news/article.cfm?c_id=466&objectid=10744518)

(Note to overseas readers: The NZ postal service is not that efficient; bills get lost in the mail from time to time!)

What Mercury Energy keeps very quiet is that the GloBug system relies on smart metering technology. (See; http://www.epaynz.co.nz/product-range/prepaid-electricity) This technology, which allows remote disconnection when people’s prepaid credit gets too low, has transformed low income households (which were previously considered a financial liability by the company) into a “cash cow”.

“It [the GloBug prepay power system] has also turned some accounts, traditionally regarded by the industry as the worst customers, into some of Mighty River’s most-valued customers.

So, while Mercury Energy is being paid in advance for supplying electricity, the GloBug system relies on microwave radiation producing “smart” metering technology that may put its customer’s health at risk. And many of its customers will not even realise that opting for (or being forced to accept) a GloBug system means increased exposure to potentially carcinogenic microwave radiation.

The traditional analogue (Ferraris) meters installed in NZ when electricity was considered an essential public service (and was supplied by local authorities,rather than greedy corporations) do not produce any microwave radiation. Analogue (Ferraris meters) are still on the NZ market but many electricity retailers are trying to force their customers to accept smart meters.

NB: While Mercury Energy pioneered the use of GloBug in NZ, the company  is not alone in using the GloBug system for prepay electricity;  Meridian is also reportedly using this system.

A friend created a new logo for Mercury Energy to reflect the company’s reported bullying of its customers to try to get them to accept “smart” metering technology.

For a photo of a type of smart meter used in conjunction with a GloBug, please see this link: https://www.stopsmartmeters.org.nz/latest-news/aerial-installed-inside-family-home-as-part-of-a-globug-set-up/

NB: If you are concerned about the financial, health or other risks of smart meters, please sign up to the free email list at www.stopsmartmeters.org.nz Thank you.

I will be keeping an eye out for the installers as I have been given the  thumbs up from Mercury that they have sent a request to the installers not to go ahead. If they turn up they will be given an ear-full in no uncertain terms! Thanks for your warning.

When we had a smartmeter installed at our last house we blew around 12 bulbs of multiple different types in less than 2 months. (Of course they claimed that we had high voltage etc etc)

When I spoke to my brother in law who is an electrician, he was very interested when I spoke about it seeming to be since the smartmeter was installed, as he had had multiple complaints about new homes he had wired in the Christchurch region of which he said would have had smartmeters installed.

Of course he googled and found the issues around these things.